1968 Olympics Black Power Salute: Ever Wonder What that White Guy Was Thinking? 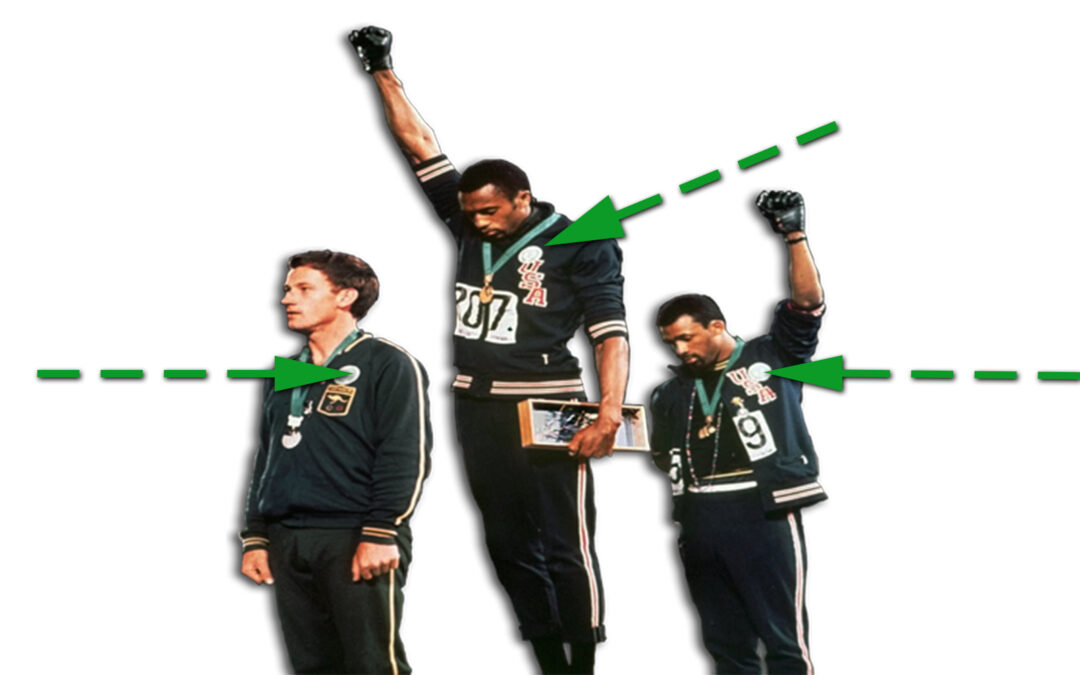 When American sprinters Tommie Smith and John Carlos raised their black fists in protest and solidarity at the 1968 Olympic games in Mexico City, I was much too young to understand the significance of the moment.

I do remember the controversy it stirred.

I have vague recollections of the negative and positive opinions voiced over the years by the adults in my world regarding whether the two men were heroes or fools. I recall that most of my people were of the opinion that it took immense courage for those two young men to sacrifice themselves for the greater good.

What I don’t remember is anyone ever discussing the white guy who stood there with them.

That white guy’s name was Peter Norman. On that day at the summer games Norman had just earned the 200 meter dash silver medal for his home country, Australia, and yes, he was well aware of the protest in advance. Peter spoke with his co-medalists about their plan, told them he believed in what they were doing, and wore a button on his jacket identical to the ones worn by Smith and Carlos which read “Olympic Project for Human Rights,” a black American organization formed in 1967 by amateur athletes.

The founding statement of OPHR read (in part):

We must no longer allow this country to use…a few “Negroes” to point out to the world how much progress she has made in solving her racial problems when the oppression of Afro-Americans is greater than it ever was. We must no longer allow the Sports World to pat itself on the back as a citadel of racial justice when the racial injustices of the sports industry are infamously legendary…[A]ny black person who allows himself to be used in the above matter… is a traitor to his country because he allows racist whites the luxury of resting assured that those black people in the ghettos are there because that is where they want to be… So we ask why should we run in Mexico only to crawl home?

Norman agreed with that premise, stood proudly with Smith and Carlos, and like them, he paid a heavy price for it.

Most people who are knowledgeable about that moment in history know Smith and Carlos were ejected from the games immediately and stripped of their medals. Though some in the black community hailed the men as heroes, their “official” reception back in the U.S. was beyond frigid. Both men had difficulty finding jobs and Smith was dishonorably discharged from the Army Reserve for “UnAmerican activities.” Both received death threats.

The Los Angeles Times described the raised fists of Smith and Carlos as a “Nazi-like salute.” Time magazine replaced the Olympic logo’s motto “Faster, Higher, Stronger,” with “Angrier, Nastier, Uglier” in their scathing version of the event. The Chicago Tribune called the act “an embarrassment visited upon the country,” an “act contemptuous of the United States,” and “an insult to their countrymen.” Sports writer Brent Musberger, in another reference to Nazis, called the two men “a pair of dark-skinned storm troopers” who were “airing dirty clothing before the entire world.”

And then there was Peter.

He returned to Australia to suffer a lifetime of sanction and ridicule. Though no Australian to date has ever been clocked running faster than him, Norman was never invited to represent his country in the Olympics again.

“As soon as he got home he was hated,” explains his nephew Matt Norman, director of the film “Salute!” a documentary Matt filmed about Peter’s life before and after the 1968 Olympics.

After hearing he’d been cut from Australia’s Munich team (despite qualifying) Norman quit running, and in 2000, when his country hosted the Olympic games in Sydney, he was not invited.

“At the Sydney Olympics he wasn’t invited in any capacity,” says Matt Norman. “There was no outcry. He was the greatest Olympic sprinter in our history…He suffered to the day he died.”

Though Carlos and Smith were eventually restored to their proper place as activists and heroes in the struggle for civil rights in America, and both were honored in 2008 at the ESPN Espy awards, Norman died an unsung hero in his homeland on October 9, 2006.

At the funeral both Smith and Carlos gave the eulogy, announcing to the mourners that the U.S. Track and Field association had declared the day of his death “Peter Norman Day” — the only time in the organization’s history that such an honor had been bestowed on a foreign athlete.

Both men helped carry Peter Norman’s coffin before it was lowered into the ground. For them, Norman was a hero.

Carlos referred to him as “A lone soldier,” for his determined stand against racism.

“Peter Norman is my brother from another mother…” said Carlos. “I’d die for him…”

For more information about the film visit Salute the Movie.

To read an excellent article about the Olympic black power salute and the events surrounding it, DO NOT MISS this informative piece by Dave Zirin, who is also the co-author of The John Carlos Story: The Sports Moment That Changed the World.

“Salute” the Movie is now available for streaming on Netflix!