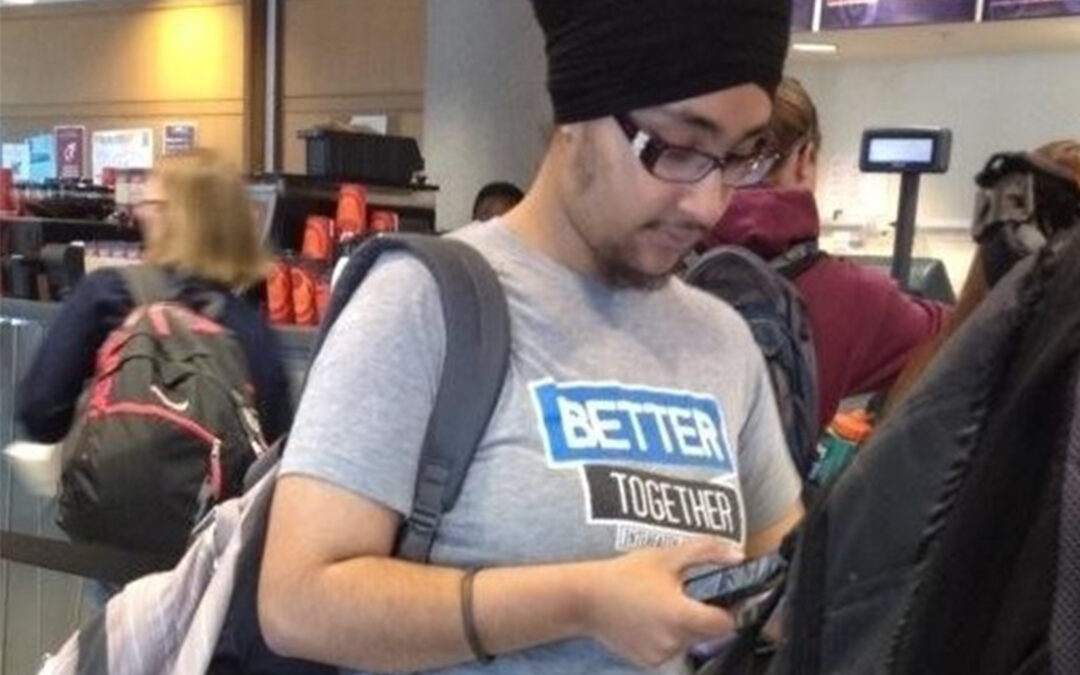 I’m not sure how much attention you’re willing to pay to the ramblings of a Reddit poster named “european_douchebag,” but the guy has sparked a conversation that has led many, myself included, to examine the impromptu judgments we make about how other humans choose to present themselves to the world—and about how the concept of “beauty” so effectively divides us.

It seems “douchebag” caught sight of the young lady pictured here and, without her knowledge, snapped this photo of her. He proceeded to post the photo on Reddit and tagged it “funny,” along with the caption, “i’m not sure what to conclude from this.”

On the cyberbullying meanness scale, I’d give douche’s caption a 2.5, but the message he not-so-subtly conveyed about his photo’s subject was, What’s wrong with this picture? The photo elicited hundreds of responses, many of them considerably more cruel than Douche’s original caption.

Of course, with the virtual world being as small as it is, a friend eventually alerted the photo’s subject that she was being ridiculed online, and, well,  I’ll give you four wild guesses how the “victim” responded:

A. She contacted an attorney and issued an immediate cease and desist letter to Douche and Reddit.
B. She combed through Douche’s Reddit ramblings and found several posts with which to embarrass him.
C. She took the high (ignore that insensitive jerk) road.
D. None of the above.

Against the advice of cyberbullying experts, who warn bullying targets to “never reply to cyberbullies -even though you may really want to,” the young lady posted this response to Douchebag’s photo share: (The paragraph breaks are mine)

Hey, guys. This is Balpreet Kaur, the girl from the picture. I actually didn’t know about this until one of my friends told on facebook. If the OP wanted a picture, they could have just asked and I could have smiled 🙂 However, I’m not embarrased or even humiliated by the attention [negative and positve] that this picture is getting because, it’s who I am.

Yes, I’m a baptized Sikh woman with facial hair. Yes, I realize that my gender is often confused and I look different than most women. However, baptized Sikhs believe in the sacredness of this body – it is a gift that has been given to us by the Divine Being [which is genderless, actually] and, must keep it intact as a submission to the divine will.

Just as a child doesn’t reject the gift of his/her parents, Sikhs do not reject the body that has been given to us. By crying ‘mine, mine’ and changing this body-tool, we are essentially living in ego and creating a seperateness between ourselves and the divinity within us.

By transcending societal views of beauty, I believe that I can focus more on my actions. My attitude and thoughts and actions have more value in them than my body because I recognize that this body is just going to become ash in the end, so why fuss about it? When I die, no one is going to remember what I looked like, heck, my kids will forget my voice, and slowly, all physical memory will fade away. However, my impact and legacy will remain: and, by not focusing on the physical beauty, I have time to cultivate those inner virtues and hopefully, focus my life on creating change and progress for this world in any way I can.

So, to me, my face isn’t important but the smile and the happiness that lie behind the face are. 🙂 So, if anyone sees me at OSU, please come up and say hello. I appreciate all of the comments here, both positive and less positive because I’ve gotten a better understanding of myself and others from this.

Also, the yoga pants are quite comfortable and the Better Together tshirt is actually from Interfaith Youth Core, an organization that focuses on storytelling and engagement between different faiths. 🙂 I hope this explains everything a bit more, and I apologize for causing such confusion and uttering anything that hurt anyone.

Can we say SCHOOLED?

Balpreet really took it there. And by there I mean LOVING, PATIENT, COMPASSIONATE WISDOM.

Did she really say, “By transcending societal views of beauty, I believe that I can focus more on my actions.” ?

Well, damn. I’m so humbled by that line (and simultaneously knocked back into my own history to examine the many many many apparel and grooming choices I’ve made in my life that in NO WAY added value to my life’s purpose, and probably inadvertently  (?)  created a carnal distraction for some poor soul struggling to stay on a spiritual path.)

I’ll give you four wild guesses as to how Douche responded to this very (clearly) loving message Balpreet directed at him which was the essence of peaceful, thoughtful, kind, and mature.

A. He photoshopped the picture with creative cruelty–ratcheting up the ridicule factor.
B. He responded to her message with vicious insults.
C. He shut down his Reddit account and disappeared from the conversation.
D. None of the above.

The answer is, of course, “D” —with an unexpected twist.

I know that this post ISN’T a funny post but I felt the need to apologize to the Sikhs, Balpreet, and anyone else I offended when I posted that picture. Put simply it was stupid. Making fun of people is funny to some but incredibly degrading to the people you’re making fun of. It was an incredibly rude, judgmental, and ignorant thing to post.

/r/Funny wasn’t the proper place to post this. Maybe /r/racism or /r/douchebagsofreddit or /r/intolerance would have been more appropriate. Reddit shouldn’t be about putting people down, but a group of people sending cool, interesting, or funny things. Reddit’s been in the news alot lately about a lot of cool things we’ve done, like a freaking AMA by the president. I’m sorry for being the part of reddit that is intolerant and douchebaggy. This isn’t 4chan, or 9gag, or some other stupid website where people post things like I did. It’s fucking reddit. Where some pretty amazing stuff has happened.

I’ve read more about the Sikh faith and it was actually really interesting. It makes a whole lot of sense to work on having a legacy and not worrying about what you look like. I made that post for stupid internet points and I was ignorant.

“Balpreet’s faith in what she believes is astounding.”

And, I would add that she stands as a magnificent role model for those who would be victimized by cyberbullying–not necessarily in her amazingly humble and instructive written response (which not everyone is mature or literate enough to effectively pull off), but in her INTERNAL response to the criticism itself. She decided not to be embarrassed or humiliated, and she clearly wasn’t, because she knows who she is. She knows where her value lies. And since that value is not related to anything material, nothing material can touch it.

I can only honor Balpreet for how far ahead of us she is in recognizing how so-called physical beauty (determined by whom?) is a stumbling block to spiritual evolution and often impedes us in living a life that adds true value to the world, though I must admit I won’t be letting my body hairs have their way in homage to her.

Having been raised in the Baha’i Faith, with “unity in diversity” as the watchwords for human interactions, it is not difficult for me to admire Balpreet and respect her choices.

On the subject of dress and appearance, the Baha’i writings advise:

“Let there be naught in your demeanor of which sound and upright minds would disapprove, and make not yourselves the playthings of the ignorant.  Well is it with him who hath adorned himself with the vesture of seemly conduct and a praiseworthy character.”  (Bahá’u’lláh, Kitáb-i-Aqdas, ¶ 159 p. 76)

Who, exactly, possesses “sound and upright minds” raises a deeper question, of course, but the concept makes so much sense to me that any extreme in dress or grooming that provides fodder for “the ignorant” can turn one’s own individual freedom of expression into another’s spiritual, emotional and moral distraction.

I am still pondering this incident and the conversations it has inspired, and I am still deciding how it applies to my own life and choices.

No, I won’t be letting my body hairs do their own thing, but I will be asking myself in what ways my individual freedom of expression is impacting my own spiritual growth, and how it might impact the spiritual lives of others.